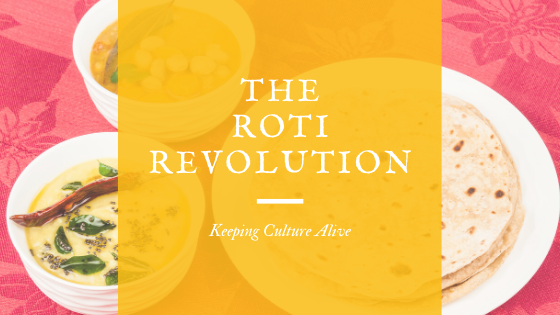 Let’s get down to some hard facts. Roti is on its way out. It’s not completely dead, but I can see what is happening... I blame the kids. They will always opt for fish and chips and pizza, even when in an Indian restaurant they will always choose chicken nuggets! Mind you, I have to be honest, when I was their age, I was the same, anything but roti - I even remember sometime sneakily hiding my roti behind the sofa when I couldn’t finish it all and wanted to avoid that brown slipper shoe slap (you know the one I mean). As I got older, things changed. The first realisation was after I had been away for 2 weeks, yes it was all very nice dining from all different places when you’re on holiday, but as soon as I got home, all I wanted was my mum’s roti. I had missed it! I craved it! Or maybe I missed home? Roti is so much more than a piece of bread. It’s your childhood, it’s memories, its family time. Despite my avoidance of it as a youngster, it is now a staple food in my home.

One thing I did have back then was the lingo, another thing on the way out! I’m a 70’s kid and like most of you, fluent in my mother language – but not my kids, on the odd occasion that I manage to coerce them to say something, they sound like Captain “eat the meat” Russell(!)

It’s sad, and I hate to admit it, but it’s a fact we have to deal with, our culture is dying... We’re not speaking the language, we’re not wearing the clothes (except for special occasions of course), we can’t watch the movies because the kids don’t understand what’s going on, what’s next?? What is happening to our cultural identity?!?!? We can’t lose the roti too!!!!! (I am of course generalising, I know there are many out there in touch with their culture, I’m just pointing out its diminishing.)

That is why my friends, I am calling for a Roti Revolution, good, old fashioned (yes old, nothing wrong with old!) TRADITIONAL roti. Support my cause, to keep roti running for as long as we can! Vow to make roti in your home at least once a week (obviously in a rotibox) not just to make a sale but to keep our culture alive! (Cue the anthem)